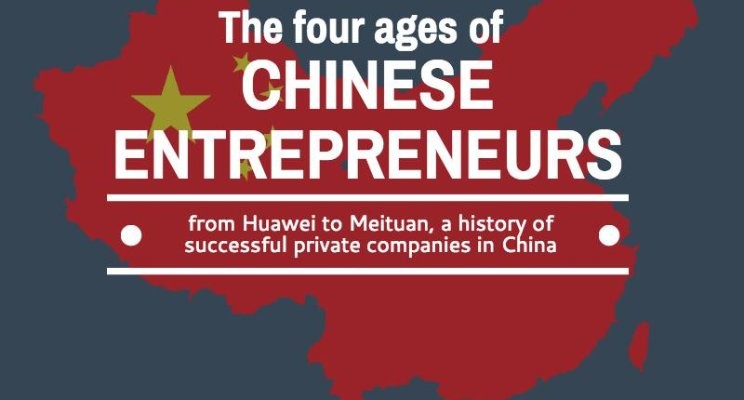 In the last two years, news on Chinese companies have frequently hit the headlines:

Each story comes from one of the four ages of Chinese tech entrepreneurs as illustrated in Edward Tse’s book “China’s Disruptors”.

The uneducated first wave from the 1980s: Huawei and Haier

The first wave of pioneers often solely owned their businesses and had little formal education.

CEO Haier Group Zhang Ruimin did not attend university as many were shut down during the Cultural Revolution. His career accelerated when he was at the Qingdao refrigerator plant in 1982. Realizing that poor quality of goods deterred company growth, he demonstrated his commitment to high quality products through the destruction of 76 faulty fridges in 1984.

Through the formation of Qingdao Haier Group in 1991 and reorganization of human capital into 2,000 self-managed teams among other changes, Haier now owns largest market share for white goods with $32.8 billion revenues reported in 2014.

Founder Ren Zhengfei had just retired from the People’s Liberation Army before setting up Huawei in Shenzhen. Ren continually infused vitality within the company by sharing his passion and establishing structure in the enterprise. His selfless nature showed in his possession of only a mere 1.4% of company’s shares.

Today, Huawei is China’s largest private exporter with two-third of its $39 billion revenues from overseas.

The second wave was instigated by Chinese Premier Deng Xiaoping’s “Southern Tour” of 1992. Through consistent assertion of open and liberal economy principles, his actions and words fostered strong entrepreneurial spirit.

As China progressively opened up, they travelled extensively and closed deals involving technology transfer. The breaking of international barriers to the Chinese market and the exposure of global competition paved the way for the establishment and growth of private companies.

The Internet entrepreneurs of the third wave with Baidu, Alibaba and Tencent, early 2000s

As China entered the World Trade Organization in 2001, it began to leverage on Internet-powered businesses. Alibaba’s Jack Ma journey has been extensively documented in Alibaba’s former VP Porter Irishman documentary “Crocodile in the Yangtze”.

He understands that the Chinese business landscape can only be adequately evaluated within national borders and envisions the creation of bridges between China and the world through the tools of the Internet and online marketplaces.

Founders were confident about raising financial capital overseas instead of locally with firmly principles of self-assurance and respect for government leadership.

These companies target Chinese internet users who differ significantly from their Western counterparts. Through their avid consumption of virtual entertainment, Tencent managed to sell $ 4 billion worth of virtual gaming goods with only $1bn worth of advertising.

Methods of running companies have deviated from the traditional top-down system. Kelly Zong, who inherited China’s largest beverage company Wahaha from her father, has revolutionized the company’s leadership style.

Wang Xing, a Chinese serial entrepreneur, first started online business platform Xiaonei that was sold to Facebook in 2005. His latest venture Meituan, a group discount website, is set to undergo a $15 billion merger with Dianping in 2015.

Lei Jun headed the efforts of Xiaomi to become multi-faceted company many liken to Apple. Previously CEO of software company Kingsoft, a huge Chinese and chairman of mobile browser UCWeb, Xiaomi is now valued over $40 billion under his direction.

Few can emulate elsewhere the success that Chinese entrepreneurs have attained. WeChat has invested heavily in overseas marketing though its effectiveness is only to a limited degree. Xiaomi has ventured into the Indian smartphone market against fierce competition from Huawei and many other manufacturers. Recent figures show a decline in Xiaomi’s sales. The smart home ecosystem is not developed enough to create sustainable revenue streams.

In 2016, the next wave of prolific growth is unclear as the Chinese market slows down with fierce overseas competition in key markets.