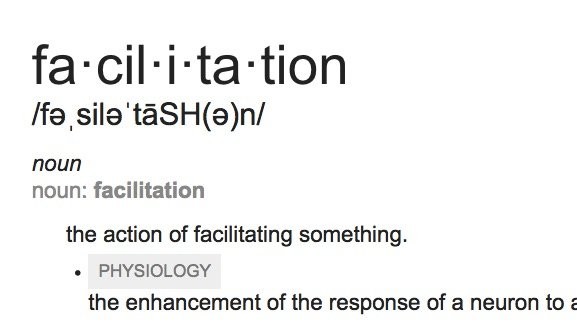 Like many concepts of the knowledge economy, facilitation might sound intangible at best, fuzzy and shallow at worst.

And just as other related services such as consulting, brokerage or inspection, a good facilitation depends mostly on the individual doing it, and on key principles and methodology to generate clear outcomes.

Over the past few months I have been regularly asked to facilitate workshops, meetings, learning expeditions and other moments when a group comes together to move forward their own journey – be it getting inspiration from outside, generate awareness for the launch of an innovation platform, or generate collective outcomes in a shorter time than meetings would usually take. 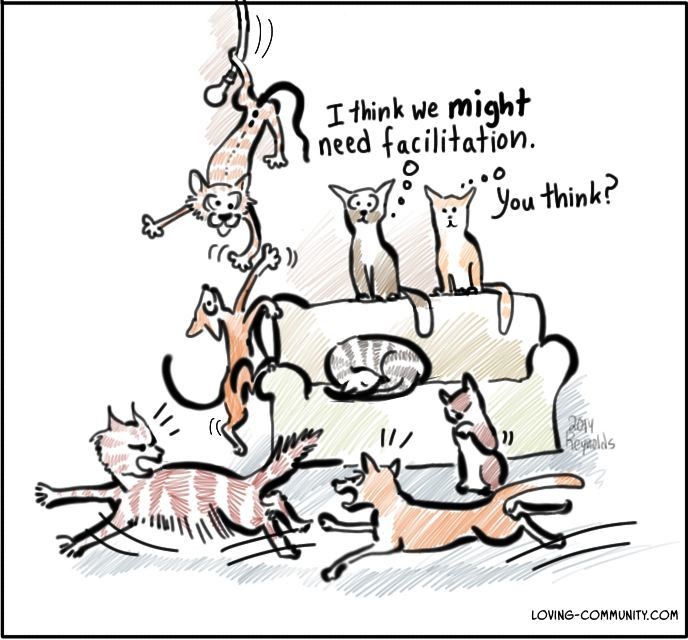 Having held frequent public speaking positions in the last three years, I felt confident enough to work with groups – small and large, but still felt I lacked a structure to guide the facilitation work that was expected. So I observed a lot of other facilitators while being myself in their groups, or working alongside them.

Passive or “mirror” facilitation: a soft hand and clear mind to generate a synthesis

The most interesting finding for me is to know whether you (as a facilitator or as a client) prefer a passive or active facilitation. Both work perfectly if the facilitator and client agree on it, or at least feel comfortable about it.

Passive facilitation, which I also call “mirror facilitation”, tends to stick to a client’s needs, its way to do, and, when with the group, by repeating or reformulating the main ideas or topics expressed collectively.

At the preparation stages, the passive facilitator will likely be keen to follow its client, and arrange the facilitation in a way that matches those needs and let the client “lead” the conversation by the choice of topics of format of interactions to allow the discussion (but not too much).

During the facilitation workshop itself, the passive facilitator would help the group to get its ideas and chaotic creativity clearer by restating, reformulating, putting in clearer words, or clearer flow. Like an improved mirror, they absorb a lot of the energy and conversations in the room to make a synthesis of it, and deliver it as an executive summary of some sorts to the client 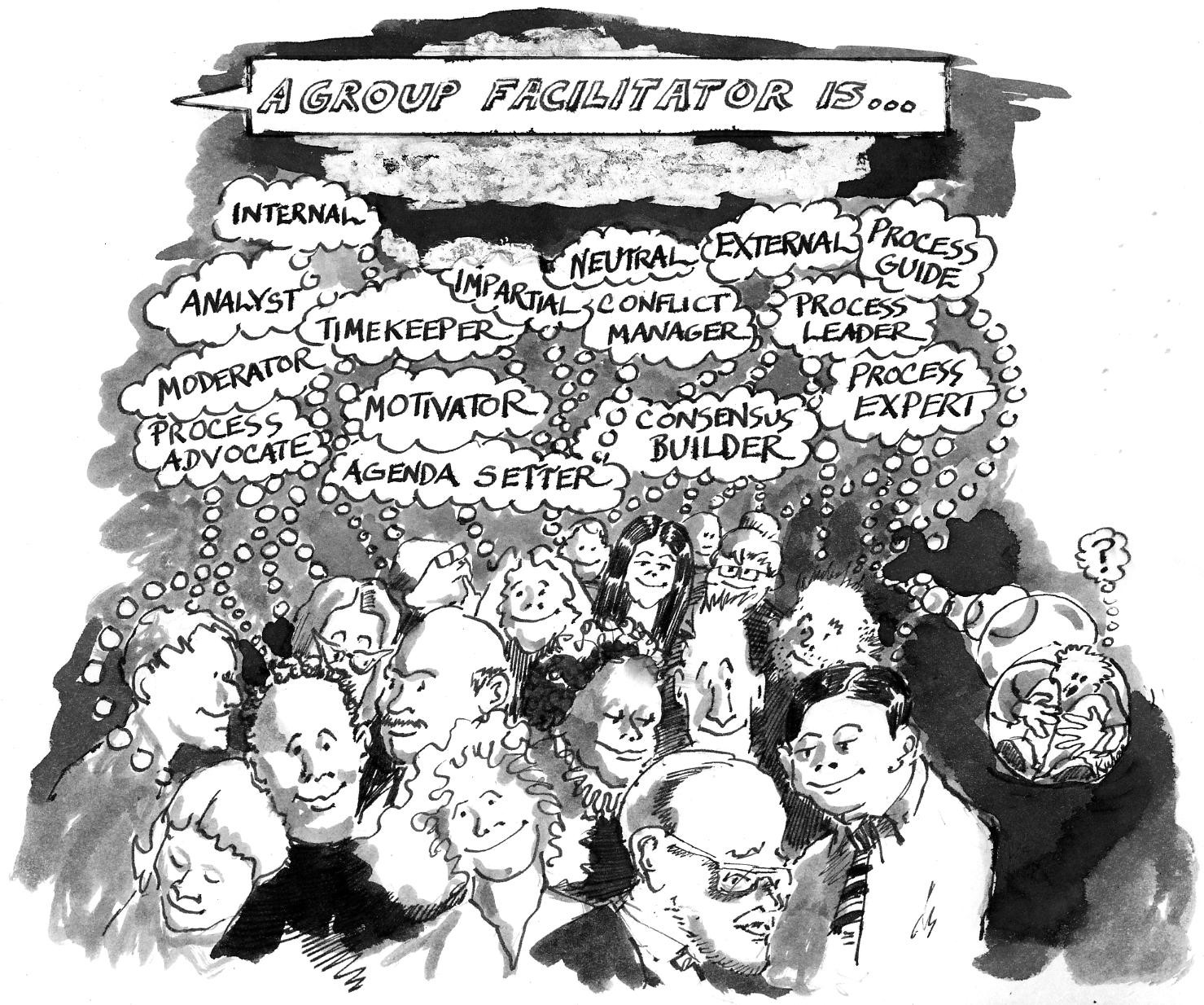 Active or “teasing” facilitation: when being blunt can help generate unseen outcomes

Active facilitation is different as it “teases” the client until both client and facilitator are sure that the outcomes fit a purpose, which can sometimes not be 100% obvious from day 1. The active facilitator, like a blunt kid, will have tendency to ask “why” many times to find the purpose behind the brief and be sure client is aligned with it.

I recently received an odd brief from a FMCG asking to find a precise number of startups on a very, very niche topic, in two countries where it’s extremely complex to find those types of startups (China and Japan). The brief mentioned a “matchmaking” session. The purpose of “why” this matchmaking would happen was not clear, and didn’t get any clearer after a discussion with the lead, so I eventually dropped the case, unwilling to get cornered in a facilitation whose outcome would not be satisfactory for the client (or for me).

At the preparation stages, the active facilitator doesn’t “mirror” the client but questions it to get this “why” clear, and then, breaks it into more detailed questions and sessions.

During the facilitation itself, as the questions have been clearly established, the active facilitator might sound less flexible as he/she knows the desired outcomes are there, and the group needs to reach them (through group session, brainstorming or other ways). It’s easy to let the group wander around, but if the objective is defined, the client will be happy when it’s reached, not when some chaotic creativity brings something else.

Beyond the choice of style – I’m convinced you can prefer passive or active depending on your character and the context of the client / its group – I would recommend the following tactics to get a satisfactory results.

Clear questions: a simple calculation of the number of participants in the room, the number of hours or days spent, the time needed on preparation, will show that any workshop or similar session is very costly for the client, at least $20k for a 20pax basic creative workshop with mid-level managers, not including the consulting/facilitation and logistics fees.

Clear questions make the session result-driven, with key elements that need answers or leads to deem the exercise satisfactory.

Strict timekeeping: one of my favorite – maybe I was a BDSM lord in a former life – is to keep timing as strict as possible. It’s annoying, it’s frustrating, it’s never enough, it’s always too short, but IT DOESN’T MATTER. As a facilitator, you have worked hard with your client to design a program. You share the responsibility of making it happen. Any time offered to the morning group will have the afternoon group being reduced or canceled. Why did we schedule it in the first place if it is to allow such a major change? Not even mentioning the impact on the later groups/participants/topics who can legitimately feel side-lined.

Follow-on: a facilitation session is a milestone, where a project or an idea launched beforehand need a key moment to crystallise, to move forward, to get inputs, or to be discussed. There is always an “after” the facilitation. I would suggest at the very least a report of key takeaways and debrief session with the client. Ideally, you have done a video clip of the facilitation day to lock the client engagement in: now that the project is highly visible, you can not really go back or not followed up on it, can you? And help to set the steps for the future (with or without you – don’t be salesy).

And of course, for you as a facilitator, a feedback form with a few questions (with at least one quantitative question asking to rate the facilitation) is key to understand how it was perceived and make it better for the next time.

Happy to discuss how you run facilitation or how you work with facilitators!